Going to Frakenmuth every November has been a kind-of-tradition of ours since we got married.  Since our anniversary is in early November, it is a nice anniversary getaway that always makes it feel like Christmastime to me.  The only year we haven’t gone was when I thought we were going, and then the night before RJ surprised me by telling me we were going to Disney World.  Which was pretty awesome, so I didn’t so much care about missing out on the Frakenmuth that year.  (Although, he has had to reassure me that we are indeed going to Frakenmuth, not Disney, for the past two years.)

This year was a whole new experience with the monkey coming along.  We spent the night at Zenhder’s Splash Village, which was super fun for Elijah.  He kept yelling “pool” and “fun” every second we were in the hotel. 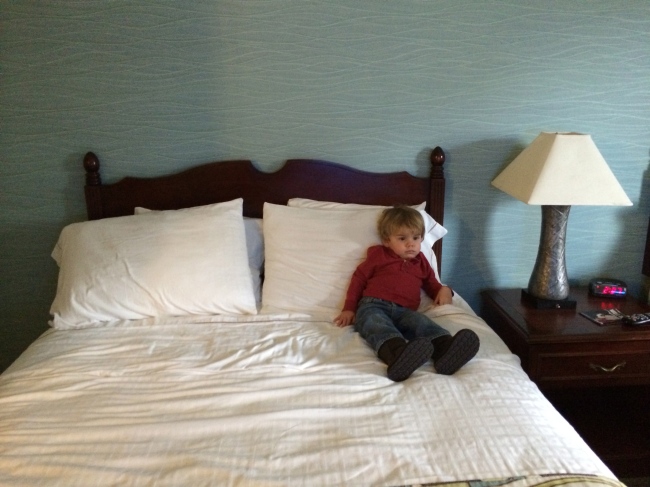 He was impressed with the beds.  We even considered letting him sleep in one for a minute, but then quickly decided against it since it took him about 2 minutes to figure out how to open the door and escape into the hallway yelling “pool!” 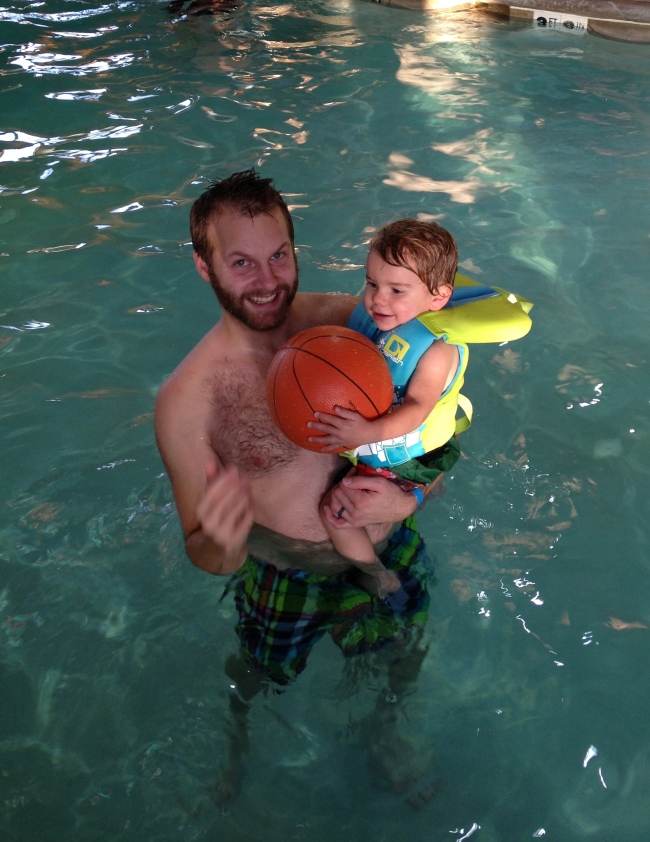 Give my monkey a basketball and he is happy. 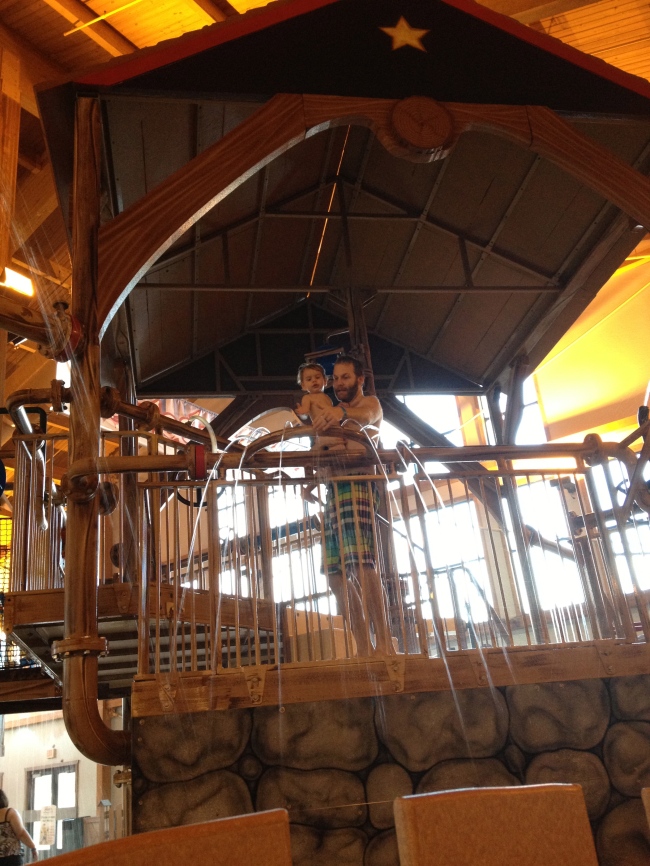 He was a little cautious on the big play area at first, but he warmed up real quick.  RJ spent most of the time following him up and down the stairs and around the perimeter to check everything out. 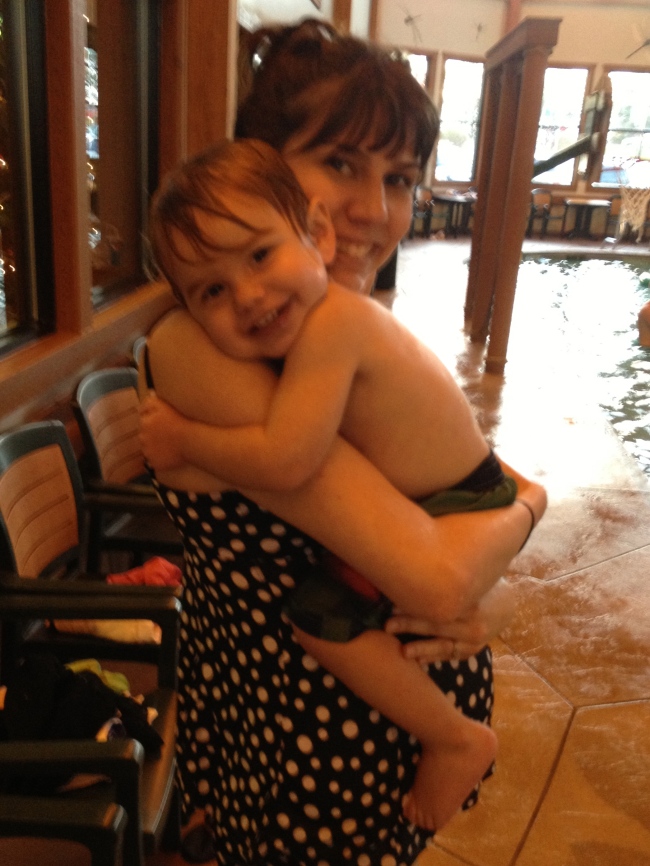 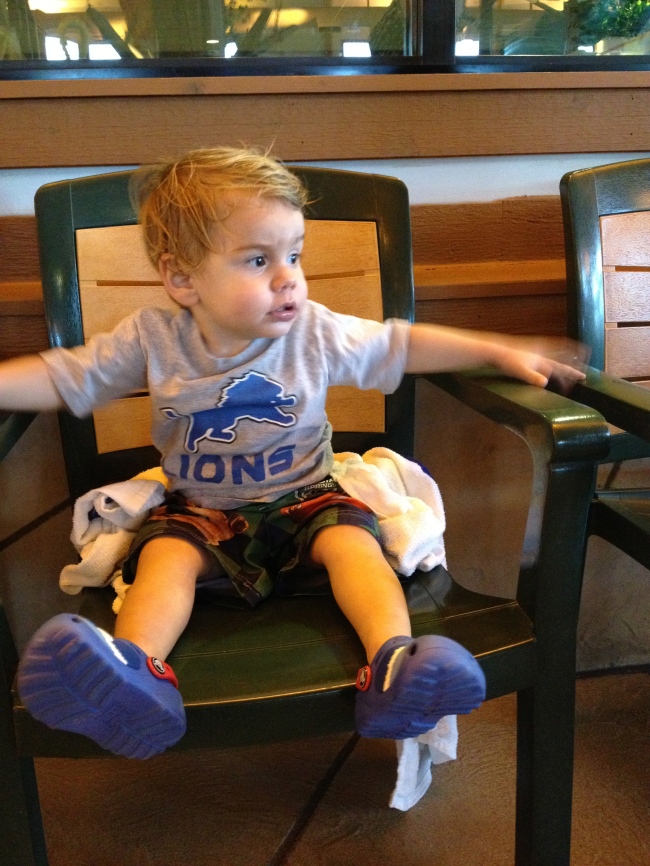 Elijah is always wanting to sit in chairs.  He thinks he is big.  I set him straight and remind him he is still my baby. 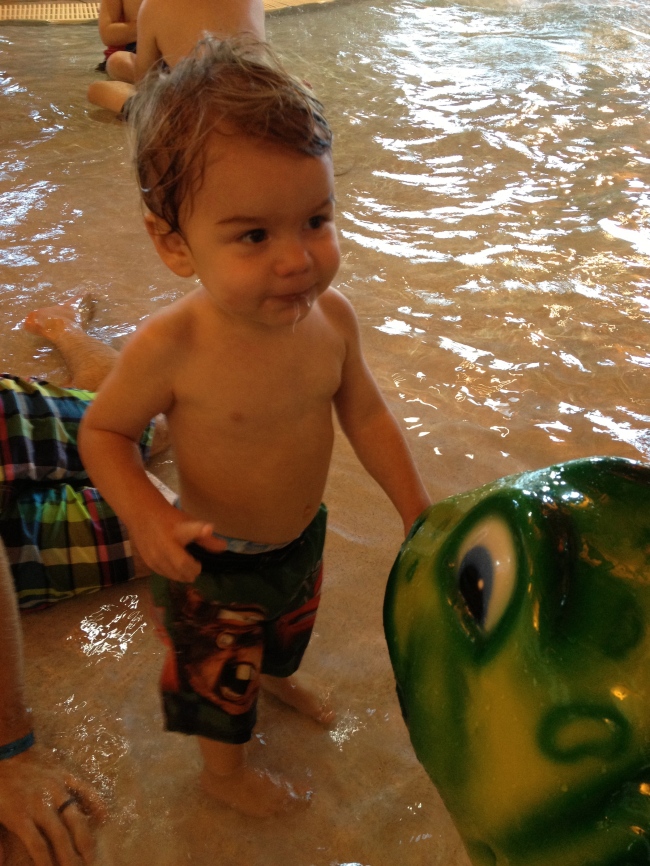 Spitting, oh so gracefully, after he was blowing bubbles in the water with Daddy. 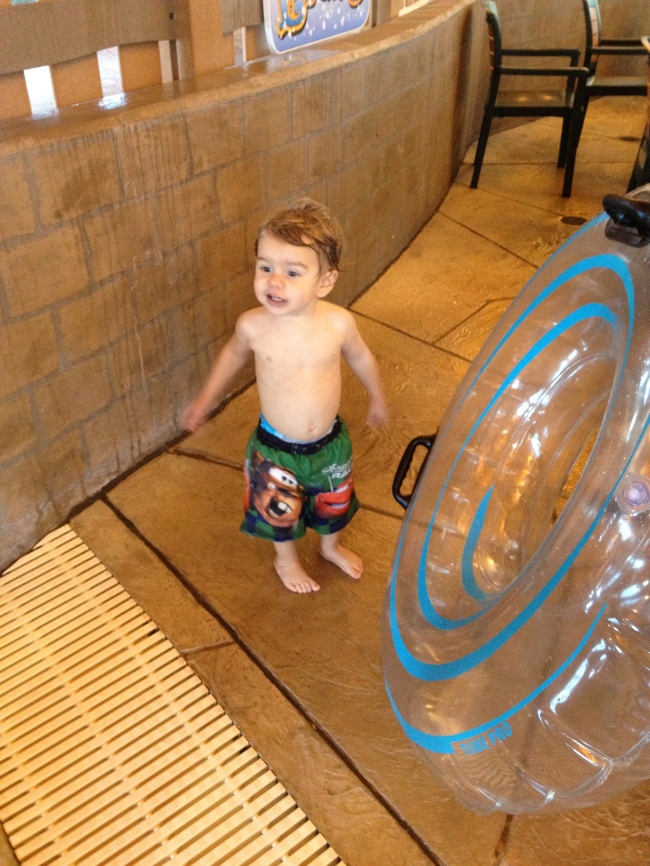 A bell would chime before the huge bucket of water dumped.  Elijah figured this out quick and got excited when it was coming. 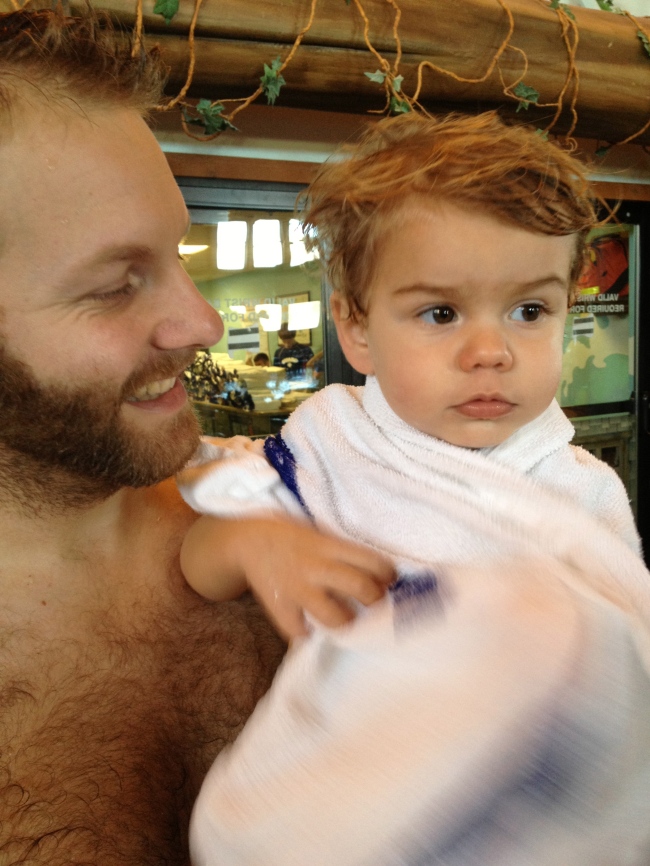 All pool-ed out.  He slept real good that night.  Real. Good.

We went to a tasty pizza place called T-Dubs for dinner and then we thought it would be a good idea to walk around a little.  It was not a good idea.  It was freezing and Eli looked miserable. 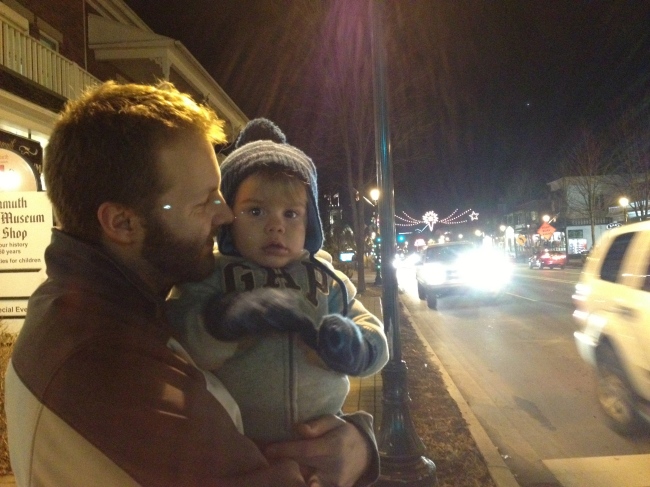 We stopped in Frakenmuth Fudge Kitchen to warm up.  And I just happened to buy 4 slabs of fudge while we were warming up… 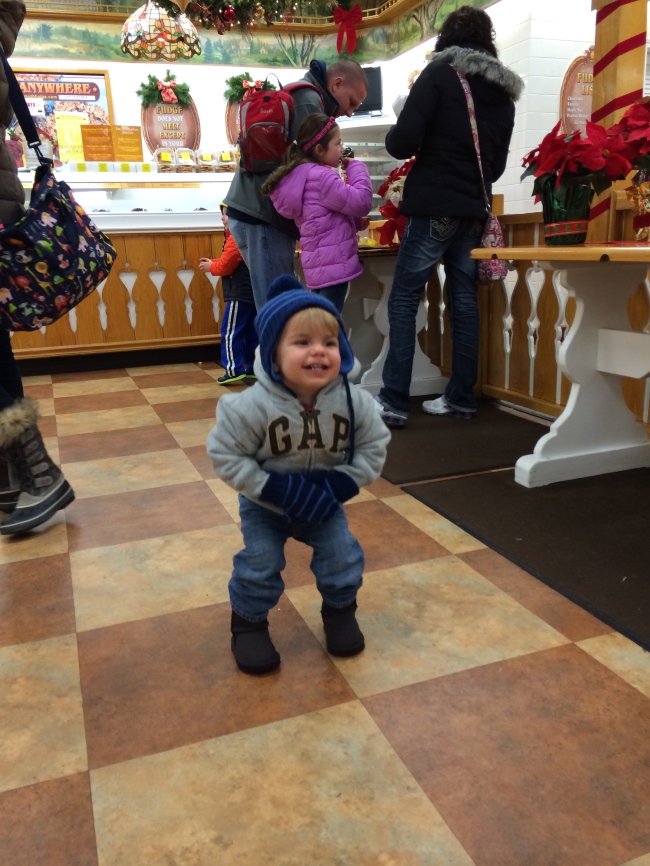 There were Christmas jams playing so Eli showed off his moves. 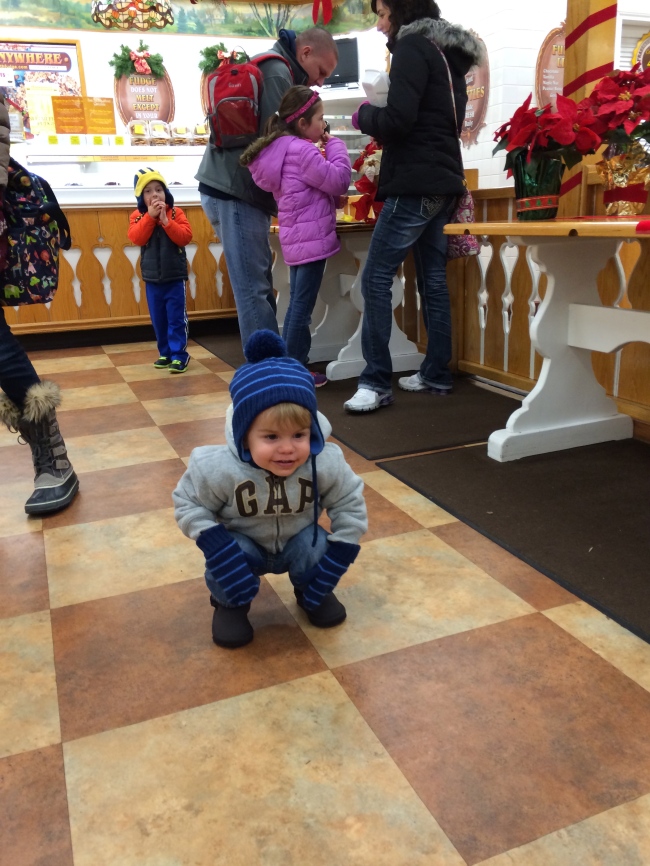 The monkey is such a goof. 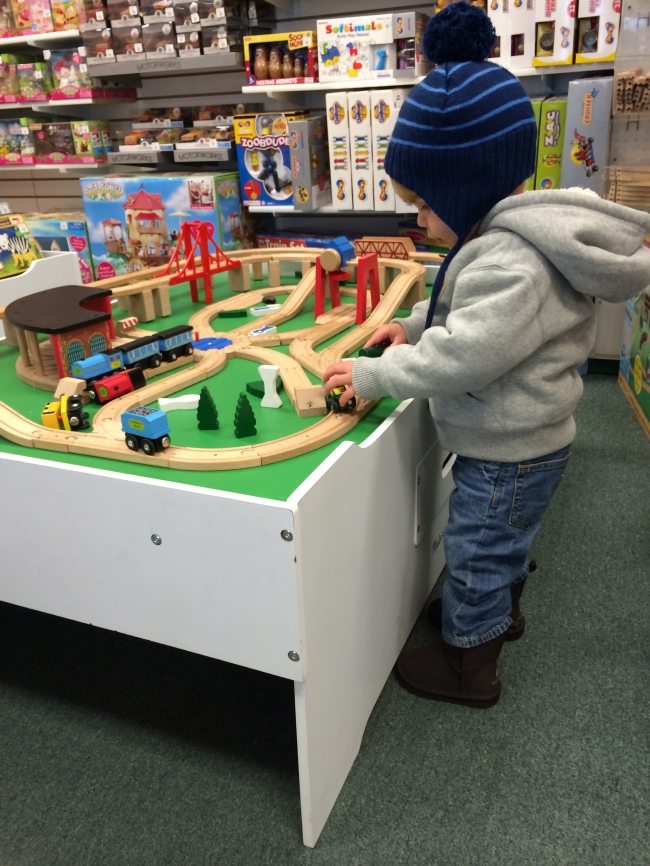 The only other store we went in was a toy store.  So Elijah had to check out the train table.

We planned on going to downtown Frakenmuth again the next morning, before we hit up the outlets, but it was cold. 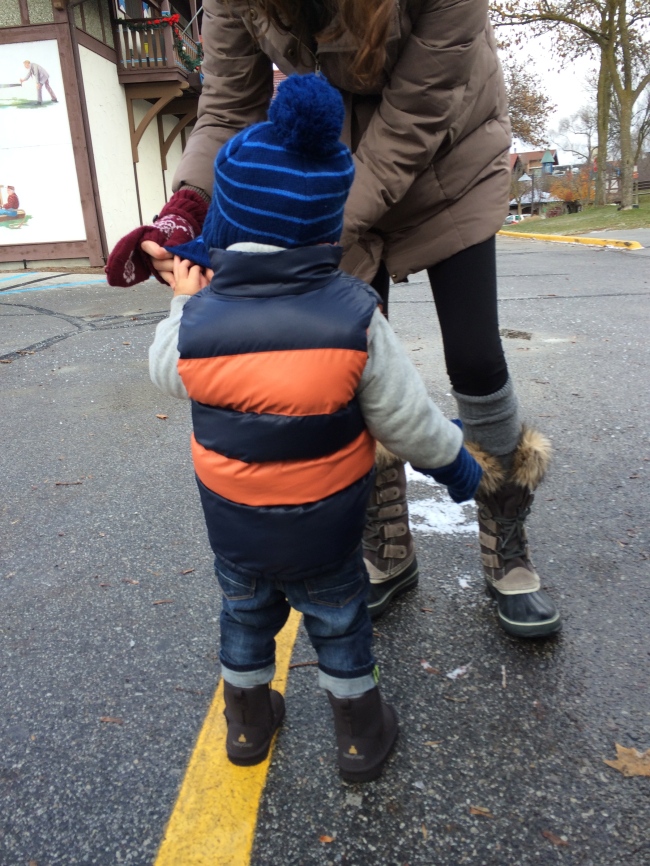 And Elijah Oscar was having problems keeping his mittens on. 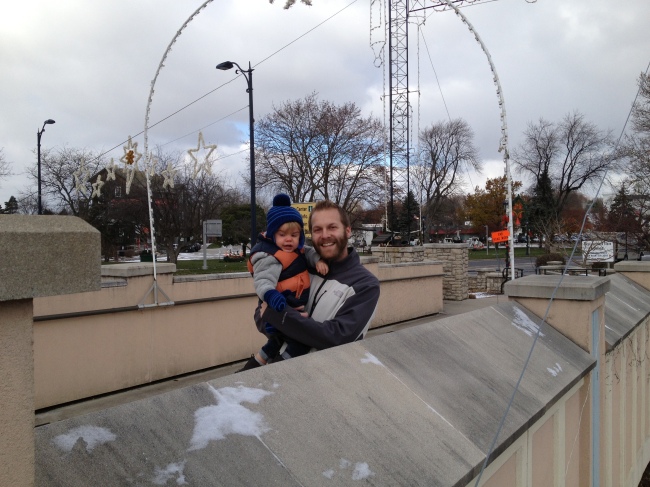 It was too cold for a baby monkey.  And he was not about to pose for some pictures in that cold either. 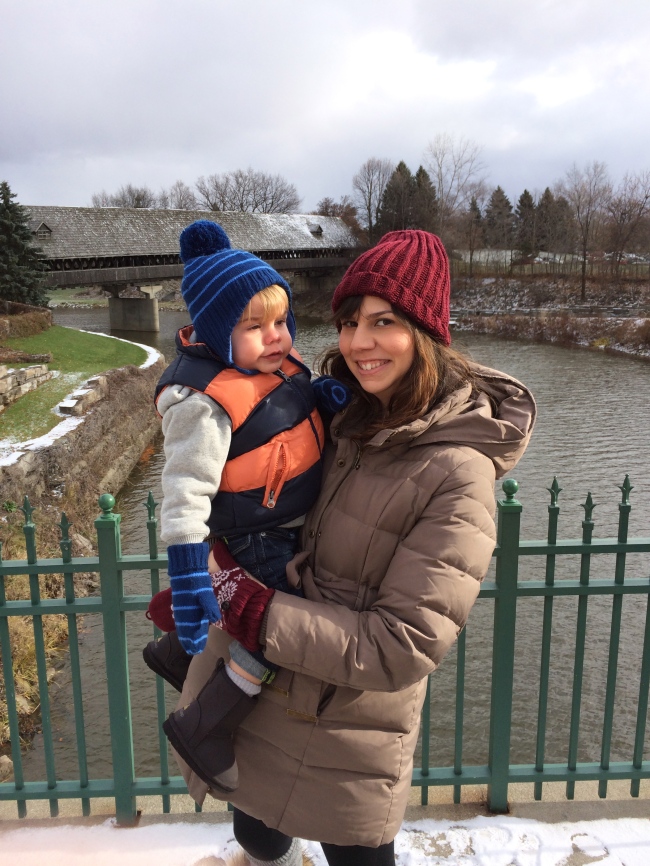 Doesn’t he look over it? 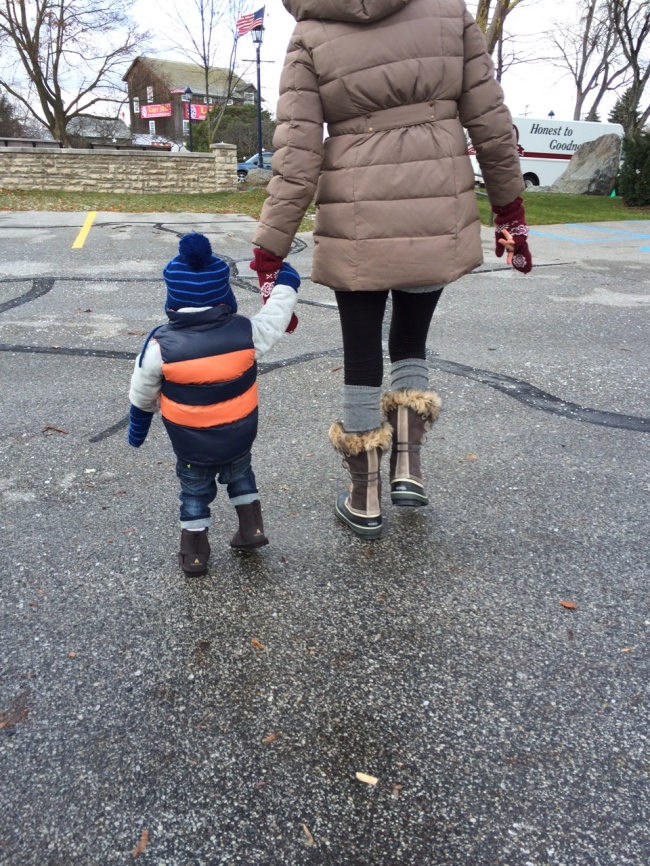 I want to go back in the spring, when its possible to walk around and not lose feeling in your toes.

As far as the outlets at Birch Run, that was a success. 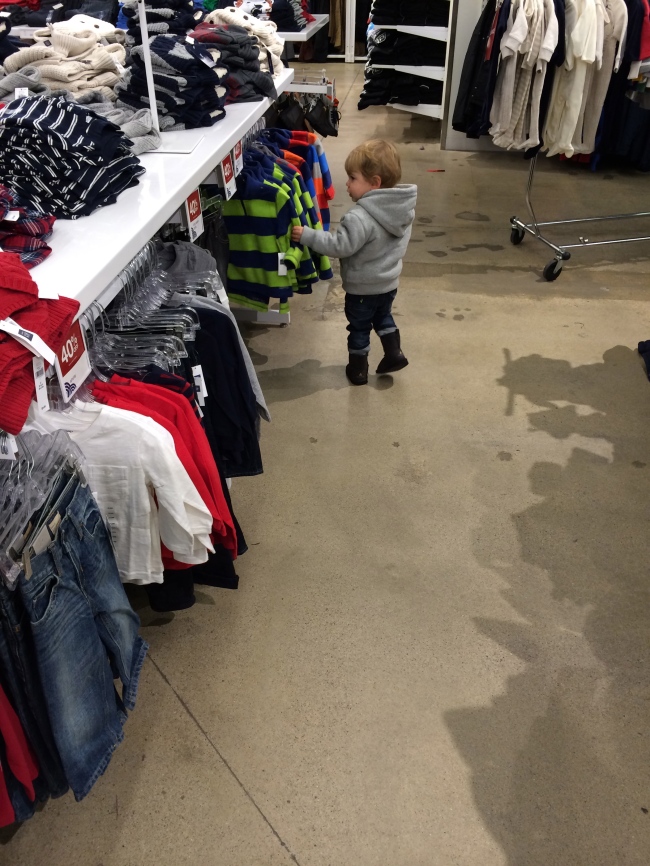 He wanted to check out the sales.  Feel the fabrics.  Shop around for a good price.  Definitely my child. 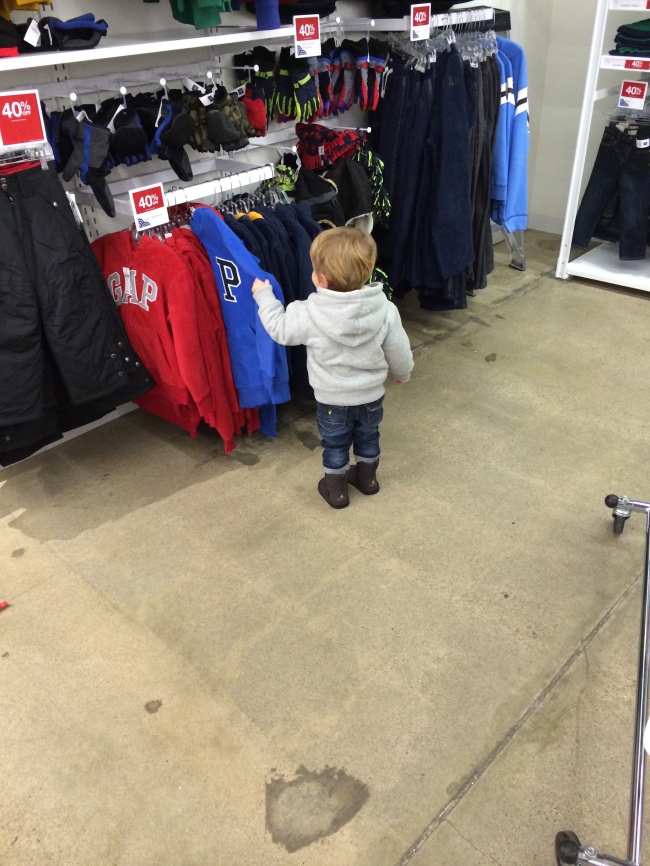 Oh, I have trained him well.

I'm Jessica. I am a wife and a mama. My husband, Rj, is a youth pastor who just began seminary this fall. Our baby boy, Elijah, is almost two and he is the coolest thing I have ever made. In February we will be adding a baby girl monkey to our family. I love doing crafts, shopping for good deals, vacations in Disney World, naps, and playing with my monkey. I have more fun picking out clothes for Eli than I should admit. I wish I spent more time reading good books. And I really miss sleeping for more than 4 hours at a time, but I am told this will happen again...one day.
View all posts by jessgrune →